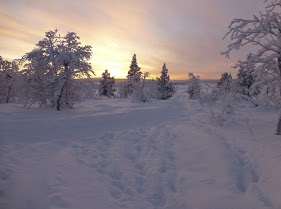 Is it really the sun peaking over the horizon?

The week around New Year I spent with Graham, Swantje, Karin, Matthias, Martin and Joachim. 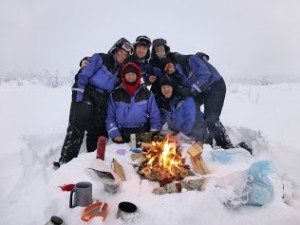 The tour started in a cold spell and the first night was spent, trying to heat the cabin up. Martin was very satisfied with the winter boots he had. I was ofcourse very happy with all the compliments for the shoes, until I found out that it was actually MY winterboots he used! 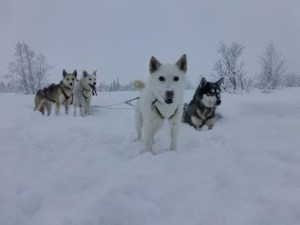 The start of this tour was definitely one to remember – with one sled trying to drive over me, the second sled driving behind me without a driver, and the next sled taking another way and disappearing in the distance. Let’s chase it, I thought; The driver however thought I was some stranger trying to outrun him and helped the sled going FASTER… Somehow we  finally managed to start up all six teams and collect them behind me. Finally some order, I thought, as sled number 5, in a grand finale, drove past all the other sleds… Never a dull moment.

Beautiful colours in the sky

However, the rest of the week went well and the group turned out to be great! We had some cold days, followed by a lot of new snow, which made the tracks heavy. One day we had to walk in front of the dogs, making a trail for them. Good training moments though. The last day we drove 40 km over good tracks, with great colours in the sky. Who needs northern lights with such colourful skies…but the very last night spent in the kennel – we finally got some great northern lights! 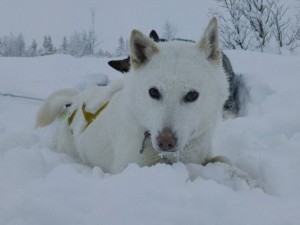 Thanks guys, for a great tour! Looking forward to your pictures.