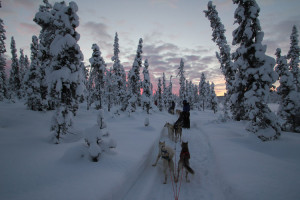 Mushing through the boreal forest

Last week I spent with another tough bunch from Australia, the Harris family. It seems that more then one Australian has found a way of escaping the heat in their own country during summer – and it IS an excellent way of chilling out…at -28! 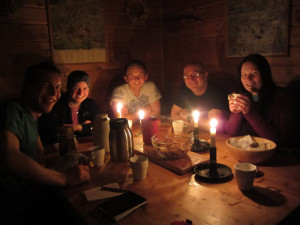 It took them a day or so to get used to the cold, but after that they were mushing like they never did anything else in their lives! Another thing Australians find strange is the sauna, as they “do enough sweating in the Australian heat without it”. Over the week they learnt to appreciate the sauna though, charging up some heat after another cold day!

The tracks were really good this week, after the cold temperatures we had. We spent the nights in different wilderness camps. 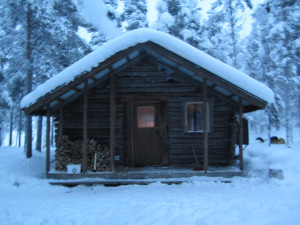 One of the wilderness cabins we use on the trail

Ofcourse these guys were hoping to see some northern lights, and they weren’t disappointed with the polar light showing itself on several occations. 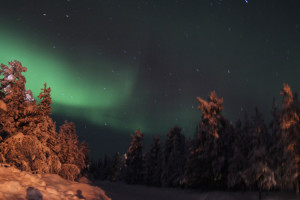 As usual, we stopped for lunch on the trail to make a warming fire to grill our sandwiches. 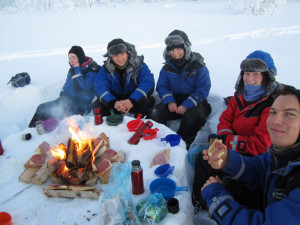 Lunch with an open fire is never boring

It’s an interesting time now, with beautiful soft lights as well as red skies, and the sun just peaking over the horizon. 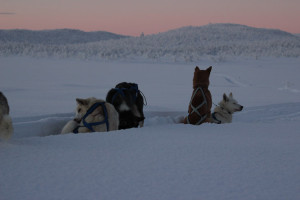 Soft colours in the sky, just before the sun comes up.

Will and Oliver took some footage with their GoPro’s. I saw some of their material, and I am looking forward to see their movie on Youtube!

Thanks for another great week tour and have a safe journey back to Australia!