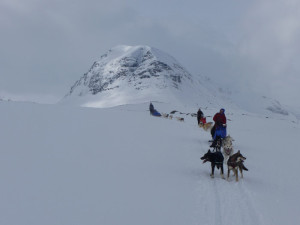 It’s already two months ago since we were on a dogsledding tour in Sarek National Park in april.

Sarek is also known as the last wilderness of Europe – it’s a large alpine area without any access roads, houses, or mobile signal.

It’s a great area for dogsledding, with valleys cutting between the mountain ranges and passes connectingt the different valleys. The best time to drive is in april, as the snow is packed by then and it’s easier to brake trails. Companies do need a permit to take people into the National Park, and luckily I managed to get this permit for april 2013.

Mushing with me were Gary, Martyn and Deborah from the UK. All of them have been on previous dogsledding trips.

We camped out in a tentipi and we carried all the gear and supplies for 6 days. We used water from open streams and one day we had to melt snow for water. On day 3 we met two skiers with pulka’s, but other then that we had the country to ourselves!

The weather was great. We had a bit of wind on one day, but other then that it was sunny and blue skies. 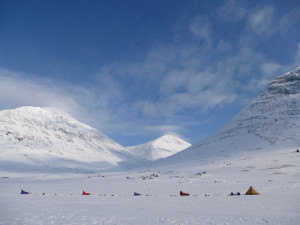 The best campsite in the world! 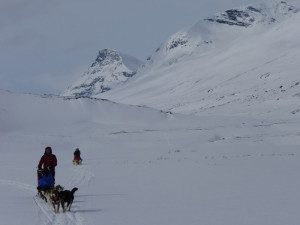 Coming down from Alkavagge in Sarek NP 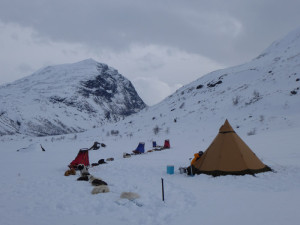 Camping in a tentipi in the heart of Sarek